The growth of electronic sports — better known as eSports — has been rapid over the last two years. The term eSports is an umbrella that describes the competitive gaming community based around real-time strategy, fighting, first-person shooter, and multiplayer online battle arena games where teams of four or more compete for trophies and prize pools. As the community has evolved over time, video game developers are being asked to consider eSports when designing.

The parallels between professional sports and eSports have become more and more prevalent as 2014 rolls along. Where football and basketball draw millions of viewers on a given night, the gaming community is gaining steam in that department.

Metrics obtained recently by DeepField.com show that Twitch.tv ranks 4th in peak Internet traffic, surpassing both Facebook and Hulu in viewers, accounting for 1.8% of the U.S. viewership. Netflix leads the charge with 32%, followed by Google (22%) and Apple (4.3%). 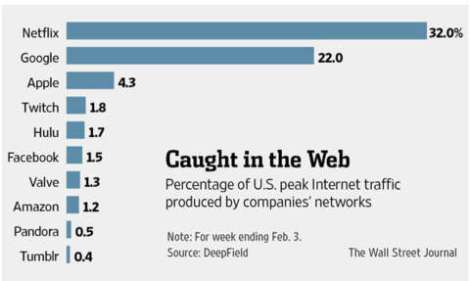 Twitch, an online platform where users can stream what games they’re playing or watch others play, is “one of the biggest users of bandwidth in the U.S. and the world,” according to their information page on the site. At the beginning of February, the Twitch team announced they hit one million active broadcasters, and that’s not to mention the amount of viewers they hit in a month (estimated around 45 million).

The fact that Twitch.tv has so many viewers on a monthly basis suggests a couple of things: people’s interest in video games is not only on playing terms now; and much like sports, they’re a new form of “television” entertainment.

“We receive a significant amount of traffic from the major esports events and nobody really comes close to us in terms of audience size in that market, but it’s the presence of the rest of the video game ecosystem, spanning casual gamers to developers, publishers, and media, that create the real magic,” Twitch’s VP of Marketing Matthew DiPietro told onGamers in an interview in February. “It’s a safe to say Twitch is the central hub for the entire video game industry to share their passion for games.”

This piece isn’t supposed to be solely focused on Twitch, but it’s hard not to tie the current success of the gaming community with the live streaming platform.

“When video game historians look back on gaming a decade from now, 2013 will be the year they cite as the tipping point of streaming,” said Matthew DiPietro Twitch’s VP of Marketing at the time. “Every major event, publisher, developer, and media outlet in the gaming industry had a presence on Twitch, and streaming became an ever-present piece of the gaming experience. And it’s only going to get bigger.”

The rise of eSports can be linked to live streaming as well even though the competitive gaming community has been around much longer than sites like Twitch. Many professional players stream their team’s practices and play sessions for fans to watch, and they typically range from about six to 12 hours at a time. A lot of the professional gamers make a living off of ad & subscriber revenue via streaming websites like Twitch or MLG.tv. Take pro Call of Duty player, Matt “Nadeshot” Haag for example — he mentioned that he’s making six figures a year just from Youtube royalties, and that’s not including his winnings from tournaments.

Stats obtained from esportsearnings.com show that the highest earning professional gamer, Jae Dong Lee, has made over $500,000 playing the Starcraft series competitively. While there is a considerable amount of money in eSports, it is still dwarfed by professional sports. The top paid athlete in the NFL, Aaron Rodgers, is making a whopping $40 million a year. Miguel Cabrera of the Detroit Tigers in the MLB just signed a deal that guarantees him $292 million over the next ten years.

That’s not to say the money surrounding eSports isn’t growing. In March, Activision – contributors to the Call of Duty series – held the Call of Duty Championships in Anaheim, Calif. where the winnings totaled a million dollars. According to quantcast.com, MajorLeagueGaming.com, who was in partnership with Activision and live-streamed the event, reached over 240,000 viewers on March 30th for the grand finals. The International 2013, a Dota 2 tournament held in Seattle, had the largest prize pool of any eSports competition to date with a grand total of $2,874,407. The winning team from that tournament took home over $1,400,000.

The eSports community now has a great effect on the developers of video games. Michael Condrey, the co-founder of Sledgehammer Games which is making the next Call of Duty in the series, has already spoken out that eSports are a very important aspect of their online play.

.@Drift0r I disarmed you w/ my charm, not the question 😉 The competitive scene is v.important to @SHGames. Can’t wait to talk eSports!

For years, professional players have complained that the developers don’t focus enough on the competitive scene, and too much on just the average gamer’s experience. Rightly so, the majority of the people buying their games aren’t professional players. Yet, with the growing audience glued to the eSports, developers have no choice but to adapt much like Condrey and Sledgehammer Games are.

We are really only on the cusp of the competitive gaming community. Kids are growing up in an age where video games are the main source of entertainment.